What a welcoming community! Noggin and I had a great time talking trail with the folks of Hanover, MA. We especially enjoyed the questions from the very young man who seems destined to become a medical doctor (human or animal). What happens if a dog is pregnant on the Iditarod? What if a dog gets a virus? His parents looked a little bewildered by his seemingly out-of-the-blue questions but, actually, I was thrilled to discuss some of the details of mushing.

When you’re running a big string, the dogs on the team become very close… sometimes too close (wink, wink). Mushers wouldn’t knowingly run a pregnant dog on the race but every now and then it happens without a musher realizing and then… surprise! I’ve never had a dog give birth on the trail but my main leader, Pig, was famous for running the Race to the Sky in Montana and then giving birth to an unexpected litter just weeks after finishing the 350-mile race. This was before I knew her, but that story fits with her tough-dog demeanor. She was 40-pounds of all-business.

My main leaders: Pig on the right, Lolo on the left 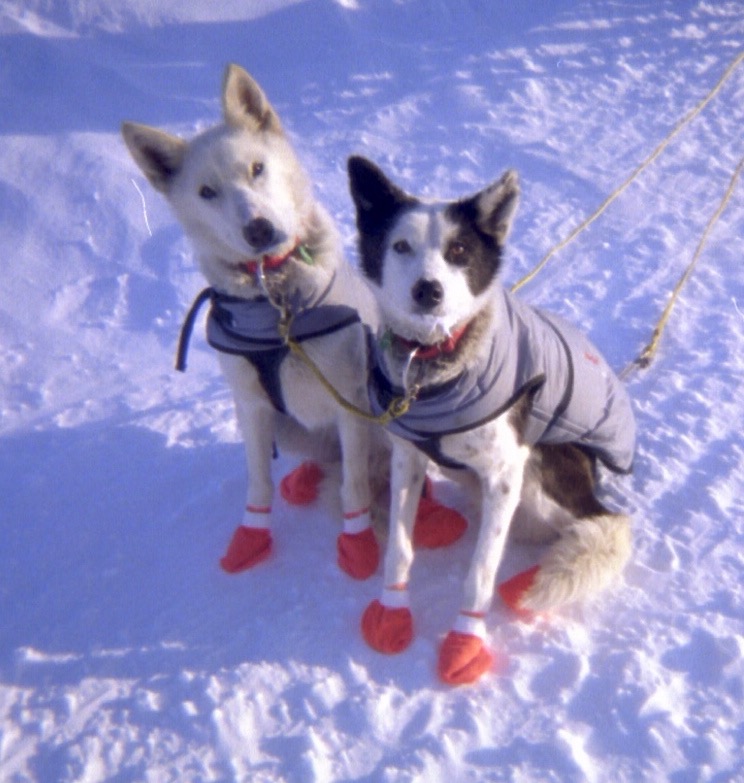 Also, it’s not uncommon for mushers to spay and neuter their dogs. A great portion of my kennel was “fixed” which made this, of course, a none-issue.

Viruses can sneak up on a team out on the trail. When you’re bringing together hundreds of dogs (some years, over a thousand) from all over the world, they can carry different bugs and make each other sick (think hundreds of human kids crammed together in a school building). We vaccinate and worm our dogs for everything possible, but lots of animals in a small area can still equal some sick dogs later on down the trail. Sometimes, a stomach bug running through a team can cause a musher to decide to pull a team from the race (scratch). But more often, if a musher just sits back at a checkpoint, hydrating, feeding, and resting the team for however long it takes, the dogs bounce back. Alaskan huskies are incredible athletes. They never cease to amaze those who love them and work with them.

Thanks to the young doctor for the fun conversation and to all of the other kids who thrilled me with their great questions and knowledge (the girl who said bison could be a problem on the trail… yes!). I felt like I was at a checkpoint on the Iditarod, talking sled dogs with my musher friends. Hanover has some mushers-in-the-making!

Karen Land is a writer, public speaker, and library-lover, giving Iditarod dog mushing presentations at schools and libraries across the country. To date, she has delivered over 1000 talks in 35 states. In the sport of mushing, a sled dog team is often referred to as a "string of dogs." Her current string is made up of an Alaskan husky named Noggin and a Corgi-Springer mix named Chloe. Join them on their adventures... Email Karen at mymusher at gmail.com

I'm Being Followed by a Nose Shadow